Within the framework of the Austrian World Summit, an international delegation of Fridays For Future activists is coming to Vienna. On Monday 13 June, there will be a press conference followed by a climate strike with Vanessa Nakate (Uganda), Ilyess El Kortbi (Ukraine), Dominika Lasota (Poland) and other international climate activists. MAPA (Most Affected People and Areas), people and countries that have contributed the least to the climate crisis but suffer most, will be given a space to share their perspectives and demands..

On 14 June, the activists will take part in the Austrian World Summit, which last year attracted particular attention as a political greenwashing scandal, in order to make their demands heard. Another action to draw attention to the situation of MAPA is our open letter to the austria Chancellor Nehammer, in which we reproach him for his lack of action in the climate sector and his weak peace policy efforts in the Ukraine war. In order to confront him with the reality of the people who are already affected by the devastating effects of the fossil fuel system, we invite Chancellor Nehammer to a constructive discussion with an international delegation of Fridays For Future activists*.

You can find more information about our strike on our website: https://fridaysforfuture.at/events/austrian-world-summit-lasst-die-leeren-worte-und-hort-den-betroffenen-zu.

Place and time of the press conference:

Place and time of the climate strike: 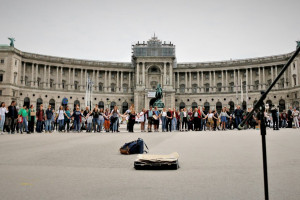